Respected by Peers and Clients

Sean M. Burke is a personal injury attorney at Burke Argos. Although he represents all types of personal injury victims, he is particularly drawn to the field of medical malpractice and complex cases. He enjoys holding negligent medical providers accountable for their actions and protecting future patients from becoming victims.

Sean: The reason I was drawn to medical malpractice was because it's such a fascinating field. There are a lot of complexities. There's a lot of laws that apply to it that don't apply to other cases. Many of the times when we get clients, we investigate the case and when we tell them what happened, that's the first they've heard of what happened to them or their loved one in the hospital. And I can understand how these mistakes happen, but unfortunately, it's the patient that pays the price for that. And we like to be in a position where we hold those people accountable and hopefully, in the long run, make them change so they avoid those things happening in the future. Jason: I consider myself to be one of the luckiest guys in California right now becoming Sean's partner. He has the ability to really connect with people on a highly, highly emotional and sensitive level that is what's needed to be successful as a plaintiff's lawyer, in my opinion. He focuses on what's important, which is our clients and their outcome. Sean: My father was a doctor. My mother was a nurse. I had two sisters who became nurses. My brother became a doctor. So I've come from a very long line of medical professionals. As a lawyer, it's incredibly satisfying and rewarding to be able to help people who have been injured, whether it's medical malpractice or auto accidents, however they've gotten injured and helping them to remedy that situation. 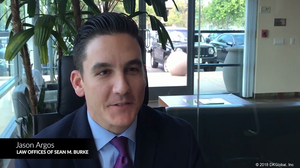