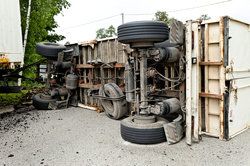 Large commercial trucks outweigh most other vehicles on the road by a significant margin, making them inherently dangerous even under ideal circumstances. Likewise, the risk of auto accidents increases dramatically when a driver’s judgment and reactions are impaired by fatigue. Combine the sheer mass of a big rig with a driver who is exhausted, and you have a perfect formula for disaster.

Truck drivers and trucking companies owe the occupants of other vehicles a particular duty of care. When they breach this duty through their negligent actions, they can be held responsible for any ensuing injuries or deaths. Operating a truck while affected by fatigue is considered an act of negligence, leaving the trucker, the trucking company, or both susceptible to a lawsuit seeking damages on behalf of the injured victim or victims.

At the Law Offices of Sean M. Burke in Orange County, driver fatigue and truck accidents form the basis of many of the cases we have successfully handled throughout our history. If you or a member of your family has been injured in a truck accident caused by driver fatigue, or if you have tragically lost a loved one in such an accident, we would be privileged to fight for your rights, using all of the resources at our disposal to obtain the full amount of damages that you are allowed under the law.

The Dangers of Driver Fatigue

Drivers who operate their vehicles while extremely tired are often as impaired as drivers who operate their vehicles while under the influence of drugs or alcohol. Any driver who is too tired to operate his or her vehicle to the best of his or her ability should stay off the road; however, truck drivers are regulated by laws that prevent them from driving while exhausted. They are subject to laws that strictly limit the number of hours they are allowed to drive in a given period, as well as laws that mandate when and how often they must take breaks.

Nevertheless, some truck drivers ignore these laws, choosing to continue driving rather than get some much needed rest. Sometimes, this decision is made by the trucker; sometimes, the trucker is facing pressure from his or her employer to meet a deadline that might otherwise be difficult or impossible to meet. In many cases, there are financial motivations behind the decision to continue driving despite fatigue.

Personal injury attorney Sean M. Burke has extensive experience and a lengthy record of success in handling truck accident cases. He thoroughly investigates and meticulously reconstructs truck accidents in order to present the strongest, most compelling cases possible on behalf of injured victims and their families. He acts quickly in order to collect precious evidence, including trucking logs, safety records, and witness interviews, which might become more difficult to procure over time. In short, he knows how to win truck accident cases involving driver fatigue.

Arrange an Evaluation of Your Truck Accident Case

To arrange an evaluation of your trucking accident case, we urge you to contact the Law Offices of Sean M. Burke today.