The Increased Risk of Auto Accidents with Cell Phone Use By Sean Burke on April 17, 2014 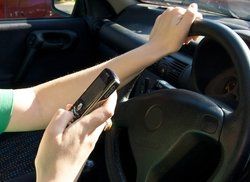 Automobiles are a luxury that is often taken for granted. It is easy to forget that, with the freedoms and conveniences allowed by motor vehicles, comes great responsibility. One bad decision or just a few seconds of distracted driving can lead to an auto accident with irreversible consequences. Auto accidents are likely to lead to traumatic injury or even wrongful death. Our personal injury attorneys help clients obtain their rightful compensation when they have been injured due to another’s irresponsible actions, such as distracted driving. A growing number of our Orange County clients come to us after being injured in auto accidents involving cell phones. Cell phones are a frequent source of distraction that can have devastating consequences on the road.

The Dangers of Cell Phone Use While Driving

Automobile accidents involving cell phones are completely avoidable, yet despite the risks, many drivers continue to ignore the statistics, and even the laws, regarding cell phone use and driving. Drivers or passengers who have been involved in an accident that was the result of distracted driving due to cell phone use may be due legal compensation for medical expenses, lost wages, or other incurred expenses or emotional damage. Using his experience and expertise, our auto accident lawyer obtains compensation for clients who have suffered at the hands of a negligent driver.

Sean M. Burke understands the rights of his clients and fights hard to ensure that those rights are protected. If you or a loved one has been injured or killed in an auto accident involving cell phone use, contact our firm as soon as possible. Mr. Burke will discuss the details of your case and determine if you are due compensation for the injuries sustained.